France-based, Malta-born poet Nadia Mifsud speaks to us about her latest poetry collection ‘Kantuniera ‘l boghod’, which explores issues of womanhood as well as the experience of the ‘Maltese abroad’ 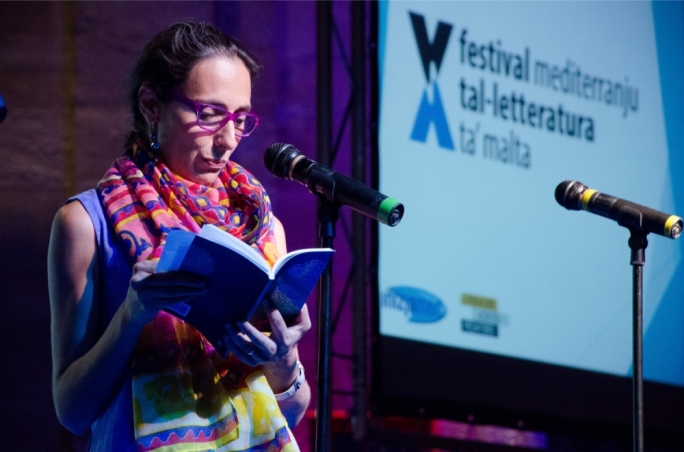 When did you first realise that poetry was to become an abiding passion for you, and how did you follow through with it?

I started writing poetry at a very young age. The first poem I remember writing was for my cousin – she had appendicitis and had to spend some days in hospital. I don’t recall exactly how old I was then but I know I was still in primary school. The content must have been very childish but it did have the form of a poem and the lines did rhyme. Moreover, it felt like the most natural thing to do.

Back then, I simply believed that everyone wrote poetry but kept it to themselves, so most of the time, when I wrote something I would either hide it or simply throw it away. I continued to write poetry throughout secondary school and Sixth Form, most of which I kept to myself or shared only with my closest friends.

By that time, I had come to realise that most people do not write poetry, and I was afraid I might come over as weird. I loved writing per se, and was actually lucky to have language teachers who offered strong encouragement and very good advice all the way. When I was in University, I stopped writing altogether.

Maybe because I was reading so much, not just literature but also literary criticism, history, philosophy, psychology, sociology. Or maybe because all my energy was then geared towards French (mastering the language so as to be mistaken for a native), my ultimate aim being to settle in France once I’d finished my B.A. It took me years to come back to poetry (or maybe it was the other way round, it was actually poetry that came back to me, as romantic as that may sound).

Considering how – to put it broadly – the idea of ‘womanhood’ is central to your poetry (Immanuel Mifsud’s introduction to the collection focuses exclusively on it), did you find many Maltese-language forbears and influences in this regard when you were first starting to write? Or were writers from other countries – as well as, of course, your own personal experience – the main spur?

People often ask me why I write so much about “womanhood”. My answer to that usually is: “Why shouldn’t I write about womanhood?” After all, Maltese literature has only just started exploring some of the complexities that go into such a vast notion. Local women writers were more than scarce on the school curriculum when I was young.

I dimly recall studying a couple of poems by Mary Meylak and Lillian Sciberras in secondary school. If you wanted to read works by female authors, you had to turn to foreign literature. Of course, later on I discovered the works of Doreen Micallef who occupies quite a singular role in the history of Maltese literature. And even later than that, I was stirred by Maria Grech Ganado’s ‘Iżda Mhux Biss’ (not just the poem, but also the whole collection).

Hélène Cixous’s exhortation to “write the body” does act, as Immanuel Mifsud points out in his introduction, as a major driving-force in the process of creation.

On this note, would you say that female writers – and especially female poets – are adequately represented in the contemporary Maltese literary landscape?

Quite, yes. Especially where poetry is concerned. I’m admiring of what female poets have accomplished in the past few years, and I’m pretty sure that the future has some very nice surprises in store for us. I would love to see many more women experimenting with prose, however, especially with novels. I think that, in this particular area, we’re still lagging behind.

Another aspect of your collection is the experience of ‘the Maltese abroad’, or at least the perception Maltese people have about both the country they’ve emigrated into, and their memories of Malta while they’re there. What attracts you to this particular theme, and why do you think it’s such a rich vein to mine for poetry?

Emigration has been part and parcel of Maltese history for several centuries. But what I’m really interested in are spaces and how we interact with them, the way our perspective shifts according to where we are standing.

The title of this collection, ‘kantuniera ‘l boghod’, tries to convey that idea – on the one hand, you could say “it’s just round the corner” which implies that something is pretty close; on the other hand, the distance is already such that you cannot actually see what is happening on the other side.

I think Maltese life offers an interesting variety of spaces for artists to explore. Take roofs. In a country like France, people do not generally take notice of roofs except when they require fixing. In Malta, the roof is as important a space as any other room in the house: we use it to hang out our washing, it’s a place where children enjoy playing, it could be a place where neighbours have a chat or where families get together around a barbecue, some people have pigeon lofts, and the list goes on.

The same goes for the Maltese ‘parapett’ and ‘zuntier’. I probably never stopped to think about these spaces when I was still living in Malta. Trying to capture the colours, smells and textures of Malta is also very important.

The smell of soap and detergents as I walk through the streets of Cospicua, or the smell of a ‘suffarell’ at a Maltese festa are enough to conjure up a whole world of memories, just like Proust’s ‘madeleine’. There is a danger, of course, of falling into the trap of a postcard representation – but then, that’s where poetic imagery needs to take over, I guess.

What you make of the Maltese literary scene in general? What would you change about it?

I am in awe of all that’s been going on in the local literary scene in the past ten years or so. A lot of energy has been put in by writers, publishers, and non-government entities to give new impetus to Maltese literature.

Much has already been accomplished but this doesn’t mean that we can rest on our laurels. We need more people (both male and female) experimenting with novel-writing. We need more books for adolescents. We need more children’s books in Maltese, especially pop-up books and touch and feel books for babies. We need more illustrators. We need to be more inventive and adventurous in book design. We definitely need a writer’s and translator’s house that offers residencies for both local and foreign writers.

But we also need more readers, curious and demanding ones for that matter, and there lies the rub. There is an urgent need for a massive national campaign to promote reading among young children and, even more importantly, to teach (not just encourage) parents how to read to their infants (babies and toddlers) and help them establish a daily reading routine. The younger the kids, the more fertile the ground!

What’s next for you?

I’m glad to say there are quite a few projects in the pipeline. As far as writing goes, I am currently working on a collection of short stories in Maltese that should be ready soon. I am also working on a novel in Maltese, the draft of which won the #abbozz competition organized by Merlin Publishers during last year’s National Book Fair. Hopefully the book will be out next year.

2016 will also see the publication by Gallimard of Immanuel Mifsud’s first novel, In the name of the Father (and of the Son), which I have translated into French. Other projects include the translation into French of Pierre J. Mejlak’s short stories (this project is being supported by the Malta Council for Culture and the Arts’ Cultural Export Fund), and the translation of Immanuel Mifsud’s second novel, Jutta Heim.

Kantuniera ‘l bogħod is on sale at http://www.bdlbooks.com and at Agenda bookshops (University of Malta, Junior College, Republic Street Valletta)